At COP26, Husk Power Systems Announces 7 Ambitious Targets to Scale the Rural Energy Economy and Minigrids in Sub-Saharan Africa and South Asia by 2030

FORT COLLINS, 11 November 2021 — At the SDG7 Pavilion today at COP26, Husk Power Systems (huskpowersystems.com), the rural clean energy services leader in Africa and Asia, put forward a bold agenda to scale the rural energy market by 2030. Husk also called on governments, financiers and other companies to increase their level of ambition to achieve the full potential of minigrids and other rural clean energy services. 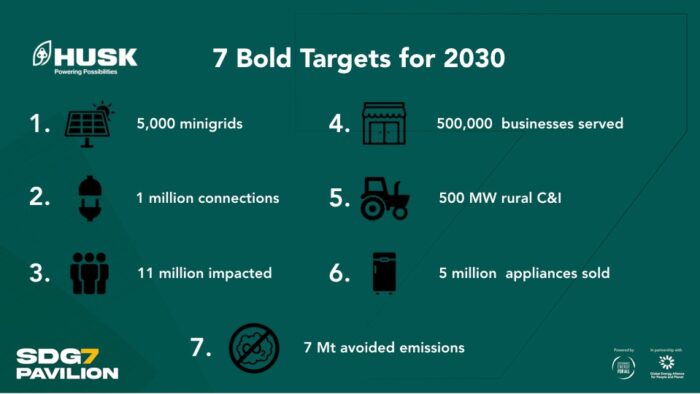 “As rural electrification in Sub-Saharan Africa and Asia rises to the forefront of international development and climate equity, it is critical that the private sector meet the opportunity by having ready a robust pipeline of bankable, shovel-ready projects, and the ability to execute at scale,” said Husk Power CEO and co-founder Manoj Sinha. “We not only want to challenge ourselves to achieve greater scale, but also to raise the level of ambition of government, finance and industry stakeholders.”

Husk Power is the industry leader, with more than 130 minigrids in operation in India, Nigeria and Tanzania, more than 6,000 MSME customers and also the highest revenue per customer and the lowest cost solution.